Andrew Adkison was born and bred in the Florida Panhandle, Lynnhaven, to be specific, right outside of Panama City Beach. Growing up, he had water in all directions - the Gulf of Mexico to the south, the luxury beaches of 30A in PCB to the west, and, just a few miles inland, hundreds of stunning, blue, aquifer- and tidal-fed lakes that are some of the most beautiful in the U.S. It’s no wonder he became a wakeboarding professional who ultimately won multiple world titles, had 30 pro wins and over 100 pro podium finishes.

These days though, he’s not so concerned with competition. Although he did take gold at the PanAm Games in Peru last year (“And that’s every four years, so I can really ride this one out!”), what really gets him going is introducing new people to water sports and particularly his corner of the world. 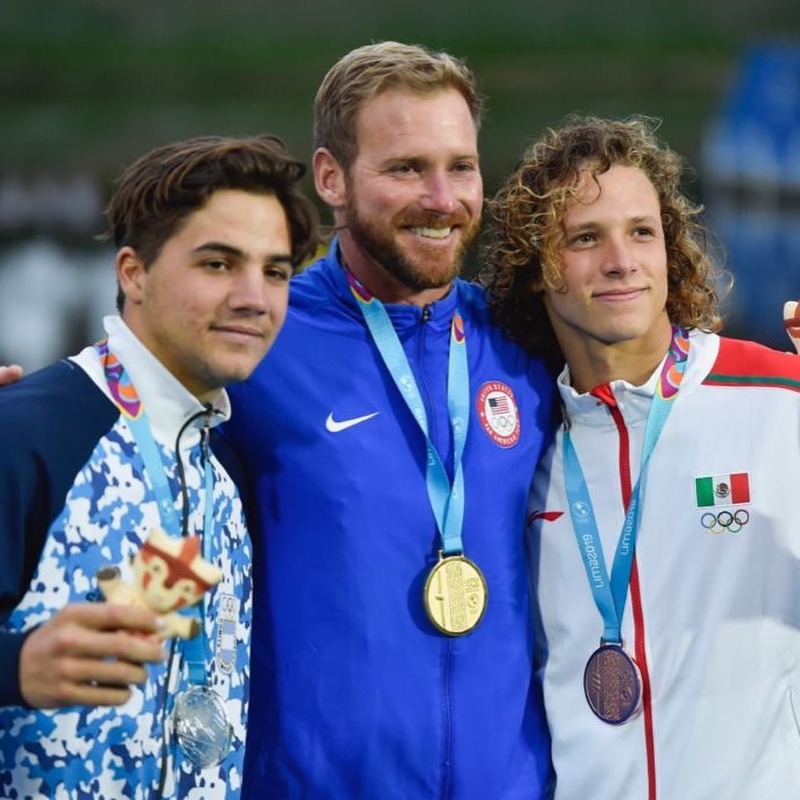 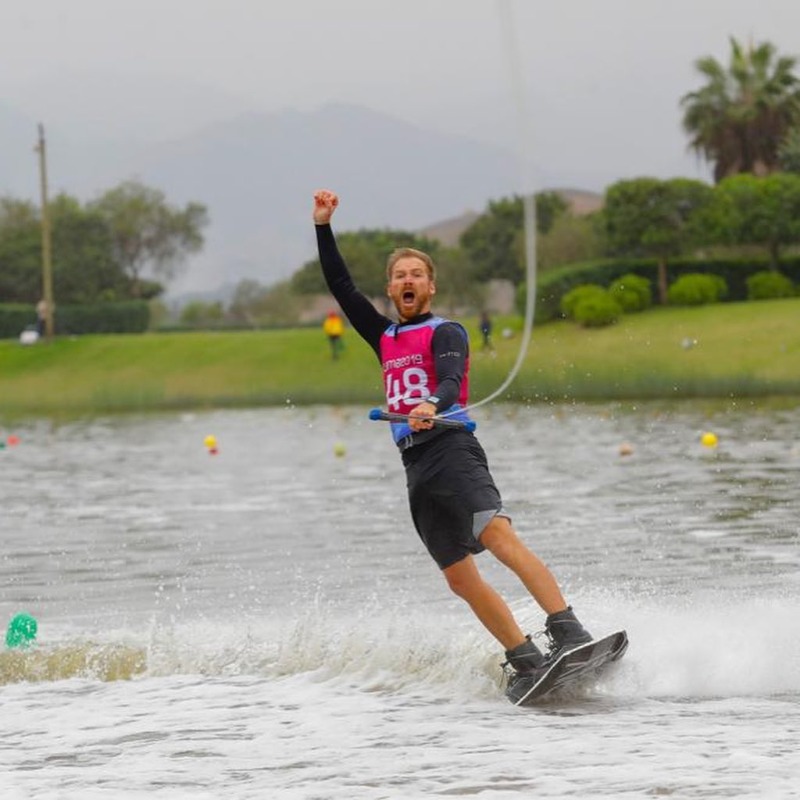 “When I was competing full-time, professionally, I was also traveling the world, doing clinics and really just having fun “on-water” experiences, he says. “It's not just, technique and this and that, it's like, ‘Let me show you something that's going to make that a little more fun for you. You've never tried at all? Let me introduce you to this thing. It's going to put another outlet of fun in your life.’"

Luckily for you, he’s a new AIO Guide and opening up that outlet to more and more people. We asked him what it’s like to wakeboard, wakesurf and e-foil the oft-forgotten Emerald Coast of Florida.

AIO: First of all, why did you decide to become an Adventure IO guide?

Andrew Adkison: Well, I've been fortunate enough that my life has been full of adventures. I was always drawn to what made me excited to get out of bed in the morning. All of those days where you'd have something fun planned, the moment your eyes open your feet are on the floor before you're even fully awake yet, because that thing you fell asleep thinking about, you're finally going to do. I just wanted to do that as much as I could, so it naturally turned into my career and this is the next chapter of that, sharing it with others. And it seems like that’s exactly what Adventure IO is about, sharing unique experiences with friends and family.

AIO: What do you think is unique about your Adventures?

AA: I mean, most people are aware of what the Gulf of Mexico looks like - that blue water and white silicon sand. There's only a handful of places like that in the world. You can be riding and see your shadow on the bottom of the Gulf, 20 feet down. I mean, it's just a really unique thing. But we also have some dune-fed lakes here, which is an anomaly in the world, there's only 28 of them and over half of those are here in North Florida. A dune fed lake is a lake where the only thing standing between the lake and the Gulf are some sand dunes and every couple of years or so, those will let out and create a river into a "pond." These are stunning spots. You can go for a wakesurf, nose the boat up on the white sand and three minutes later, our ankles are in the Gulf of Mexico.

AIO: There are some unique lakes just inland from the Gulf too?

AA: Yes, they look like the Gulf of Mexico. Just crystal clear water, fresh water and white sand beaches. It's very inviting. For those that may be intimidated in big water or the ocean, you're not going to be in this. We're talking about 100, 200-acre ponds; they feel like big swimming pools.

AIO: You offer two different Adventures, what are people going to experience on the wakeboard and wakesurf Adventure?

AA: The majority of my life was spent competing on a wakeboard, a more significant part is now spent teaching people and giving people an on-water experience that they're not going to forget. That can be anywhere from getting up on the water the first time on a wakeboard or learning to wakesurf, which is most of what I do. So if you've never tried this before, come on out, I even guarantee that we will get you up and standing sideways behind the boat. I can promise it.

But I also do advanced coaching. With all the tours and the coaches, of course, we get many people looking for an experience or an adventure that day, so we really do a lot of that, but it's been a big part of my life, coaching at a high level. I mean, whether you're looking to learn your first invert or get your first world championship, I've done it, and I can coach it. 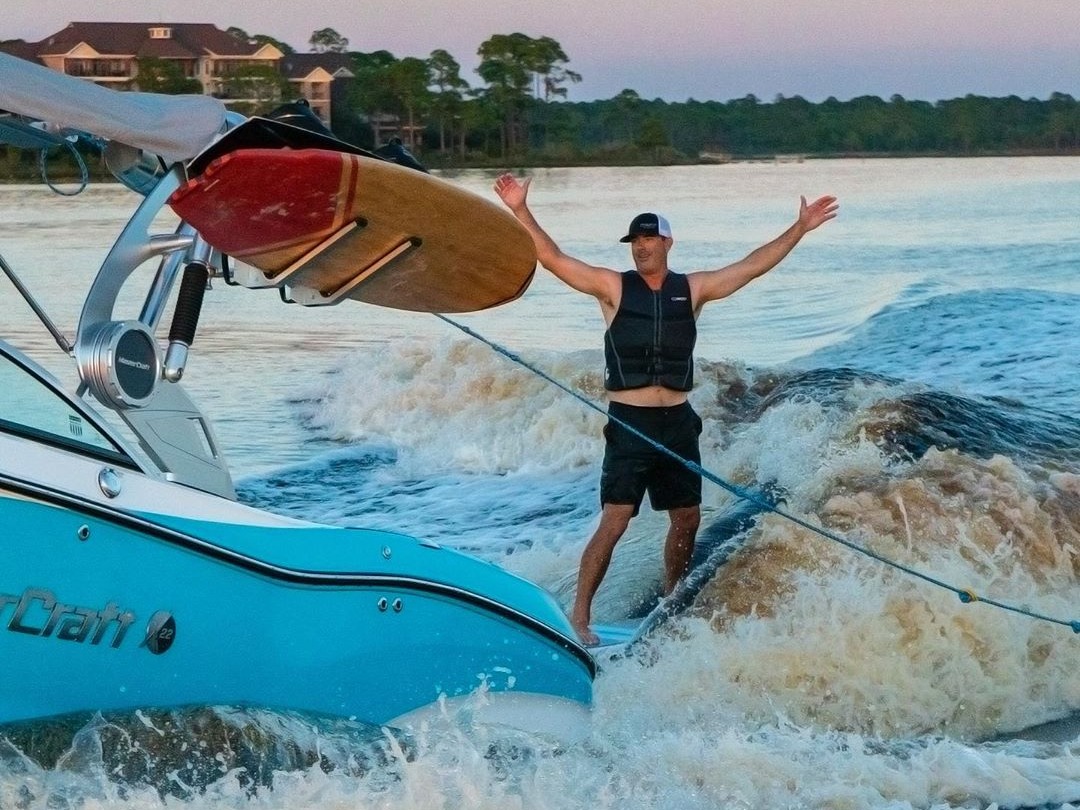 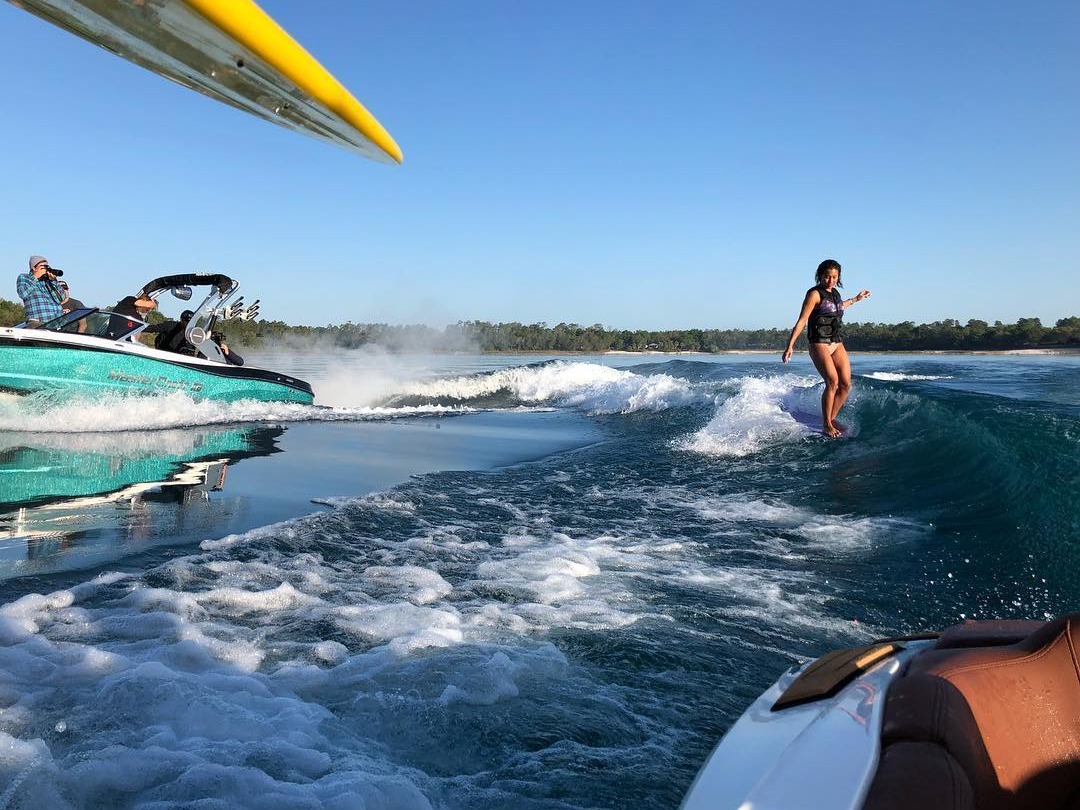 AA: It's amazing. I was hooked about three minutes in and the learning curve is surprisingly smooth. You feel connected to the water in a way that you just don't on anything else but a foil. You're flying a wing so you can climb above the chop, but you can feel the energy in the water, so if you have a little wave or a roller from a boat, you can feel that energy and that push. The e-foils throw in some freedom with that too, because you can go anywhere you want. My home lake, I have 20,000 hours, I know it's crazy to think about, but I mean, it's been a lifetime. When I got my Fliteboard, I was suddenly exploring my lake in an entirely different way than I ever had before. And likewise, this last tropical storm that we had, there was about 100 people out there surfing and I was off on the shoulder, picking up the scraps of 80, 90 waves in an hour-and-a-half.

Another cool aspect of it is you're getting a pretty good view - and you're relatively quiet out there because it's an electric motor - so you see the sea turtles, you see the dolphins, you see schools of fish. I mean, it's a big eco-adventure too, but you're also a pretty fun learning activity for your Adventure.